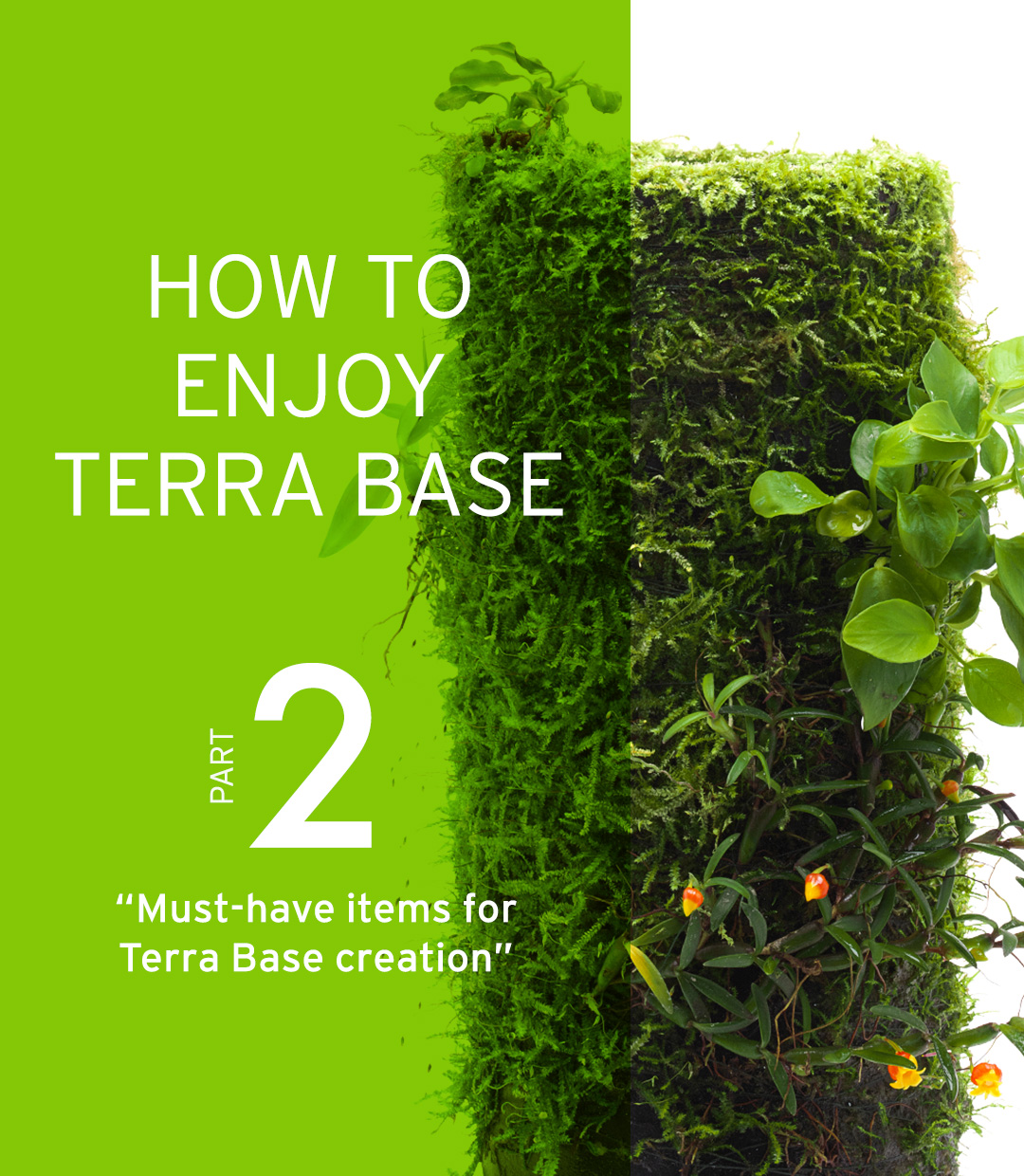 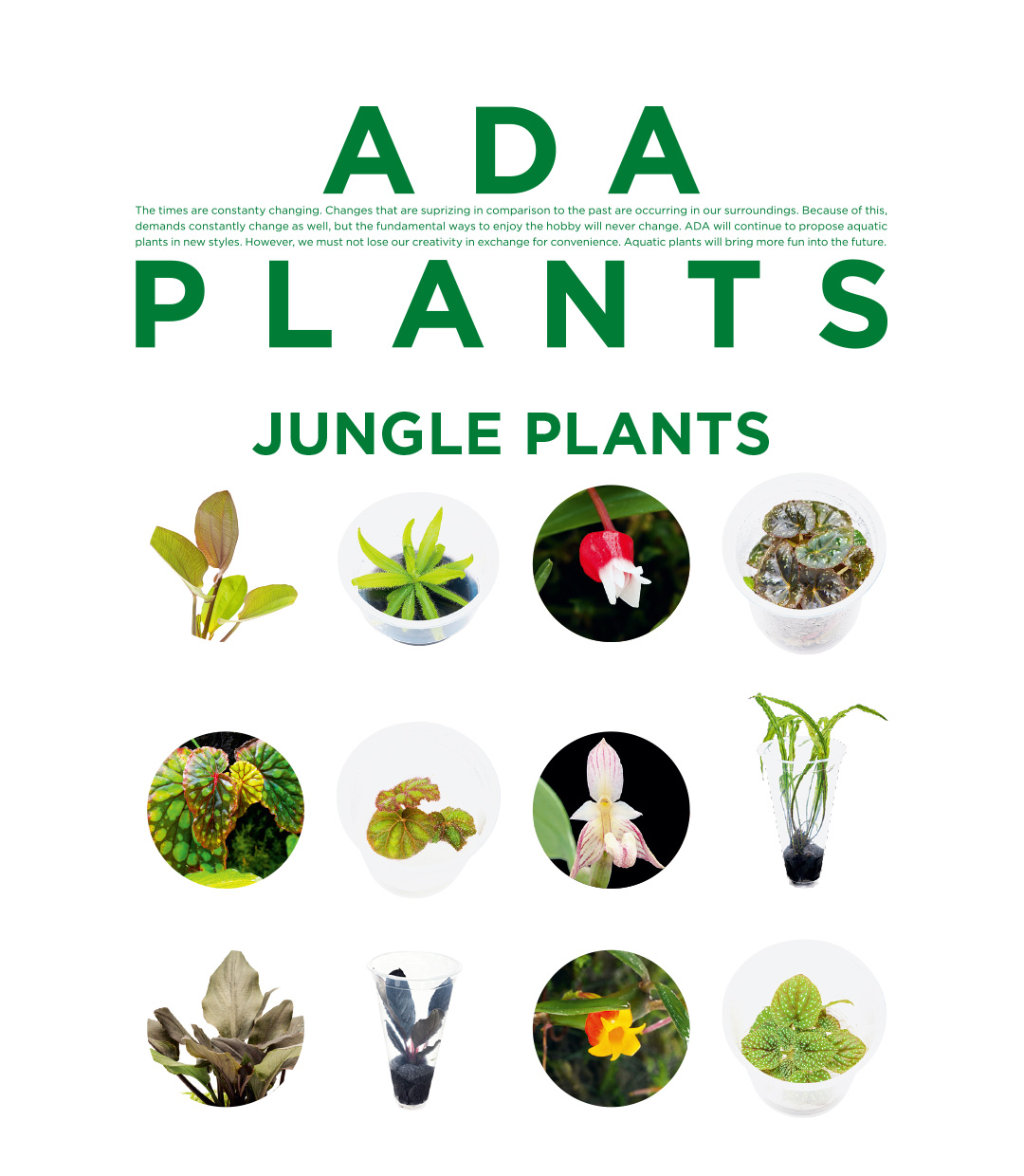 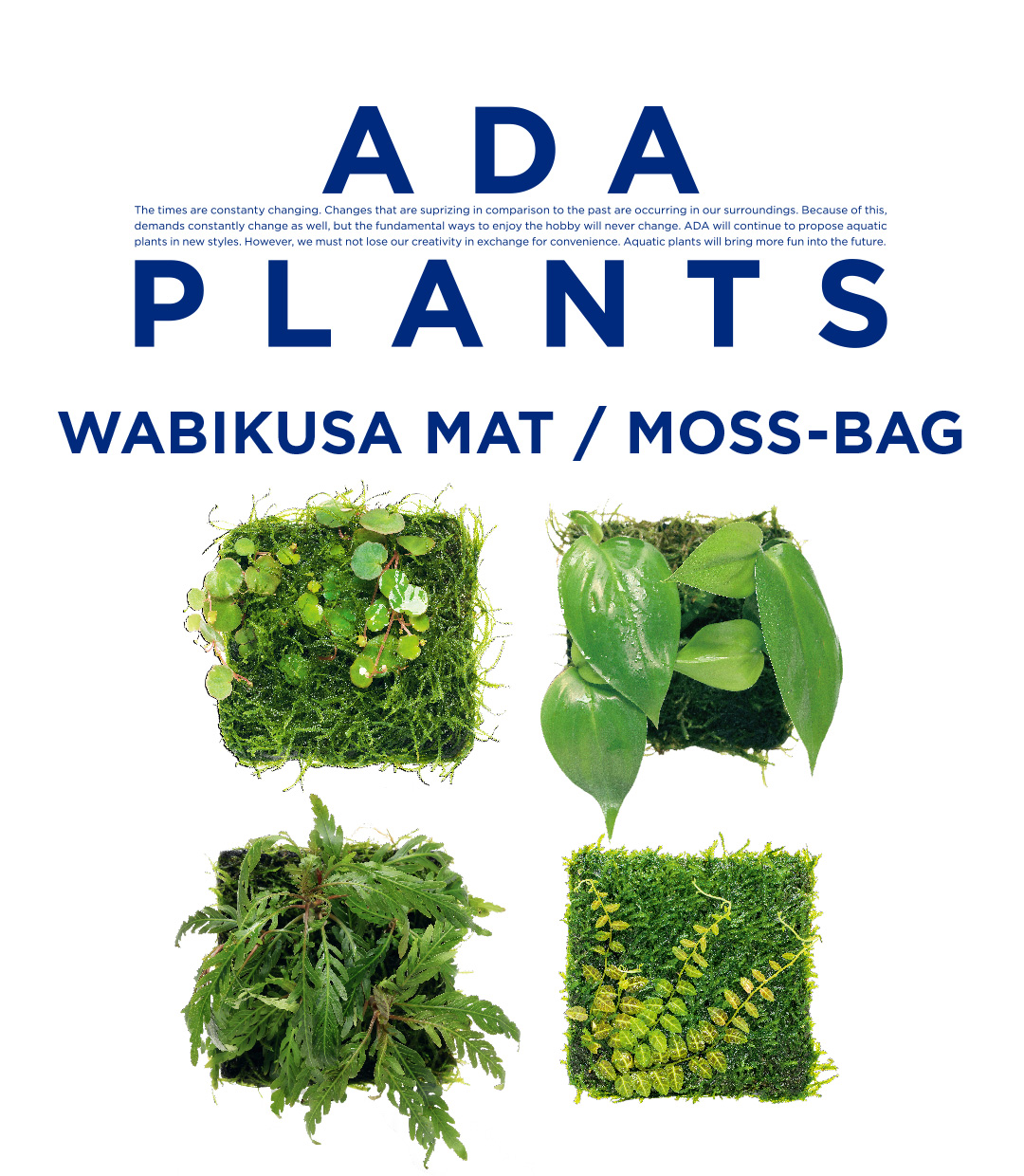 HOW TO
HOW TO ENJOY TERRA BASE ‘Yearning for cloud forests’
2021.01.15
VIEW ALL TOPICS
DISTRIBUTORS
PRODUCTS
Product Information Top
Aquarium Products / Relative Products
LIGHTING SYSTEM
CO2 SYSTEM
FILTRATION SYSTEM
AQUARIUM TANK
SUBSTRATE SYSTEM
LIQUID FERTILIZERS & ADDITIVES
WATER CONDITION & TREATMENT
LAYOUT & MAINTENANCE TOOL
FISH FOOD
Living Products / Material
WABI-KUSA
BIO MIZUKUSA NO MORI
Stones
Driftwood
PUBLICATIONS & OTHERS
PUBLICATIONS
and ADA
DOOA
SUPPORT
Support Top
Contact Form
Catalog and Brochure Download
Privacy Policy
Site Map
About Aqua Design Amano
TAKASHI AMANO.JP
IAPLC OFFICIAL SITE
DOOA BRAND SITE
FOLLOW US
JAPANESE
ENGLISH CHINESE
VIEW ALL TOPICS
PRODUCTS TOP
This summer, the “Kata No Kioku Exhibition” held at the Sakyukan in Niigata City is intended to look back on lost Yoroigata lagoon by photographs, paintings, and fishing gear that was actually used. When I was asked to produce an aquascape to be exhibited there, the first thing that came to my mind was to reproduce the underwater of Yoroigata lagoon as seen by Takashi Amano as a boy. Lush aquatic plants make photosynthesis, and fish inhabit their bushes as a haven. The beautiful scene in the old days of the Yoroigata has had a great impact on the young Amano, leading to the idea of the Nature Aquarium. I imagined the scene and created it as if I looked into the underwater of the lagoon. The environment of the lagoon where aquatic plants grow is also an important place that nurtures many lives.
Reproduce the underwater scenery and ecotone of lagoon with Japanese native aquatic plants
In order to reproduce the nature of the lagoon, I made a composition mainly with aquatic plants and tried not to make driftwood and stones stand out. At that time, the layout image was expanded by merging the natural image of the Yoroigata lagoon heard from Amano with the image of the waterside that I experienced during my youth. In order to express the world of fish spreading in the depths of aquatic bushes as seen in the lagoon, cosmetic sand usually spread in front of the layout is laid on the back, and the Eleocharis acicularis and Schoenoplectiella that have slightly longer leaves are planted in the foreground. At first glance, it seems to be contrary to the layout theory of Nature Aquarium, but by doing so, the back of the layout becomes brighter, and it seems that the space is spreading behind the bushes of aquatic plants.
Reproduce the ecotone with Wabi-Kusa
Wabi-Kusa on the surface is specially made by Japanese native Hydrocotyle, Oenanthe, Persicaria odorata, Persicaria hasatato-auriculata. It was installed so that it would be just as high as the lower part submerges in the aquarium water, using a Wabi-Kusa Hanger.
Utilizing marginal plants
We planted marginal plants such as Schoenoplectus triagulatus and Schoenoplectus tabernaemontani to give a sense of connection from underwater part to Wabi-Kusa above the water. These marginal plants can be grown for a long period of time by sufficiently spreading the leaves above the water.
Underlayer Planting undergrowth
In the area corresponding to the bottom of the lagoon, we planted Eleocharis acicularis and Elatine triandra as undergrowth. Since these aquatic plants prefer a bright environment, it is important to manage the upper aquatic plants so that there are no shadows.
Planting the mid-ground
The most difficult part of expressing the image of a lagoon is the middle-ground. Ferns and Anubias are usually used many times in the Nature Aquarium, but they do not exist in the lagoon. We planted Blyxa japonica and stemmed plants in the middle-ground this time.
Planting to draw attention
Around the aquascape, dark Potamogeton perfoliatus, Hydrilla, and Ludwigia ovalis are planted, and bright aquatic plant such as Ottelia and Riccia are planted in the center to draw the attention of viewer. This makes the fish swimming space stand out, and the viewers feel as if they are gently peeking at the haven where the fish can play around.
Swimming space in the center
In the center of the layout, slightly in front of it, a round space with cosmetic sand was set up so that it would be a swimming space for fish. The appearance of fish swimming in the depths of pretty aquatic plants will surely enrich our hearts. 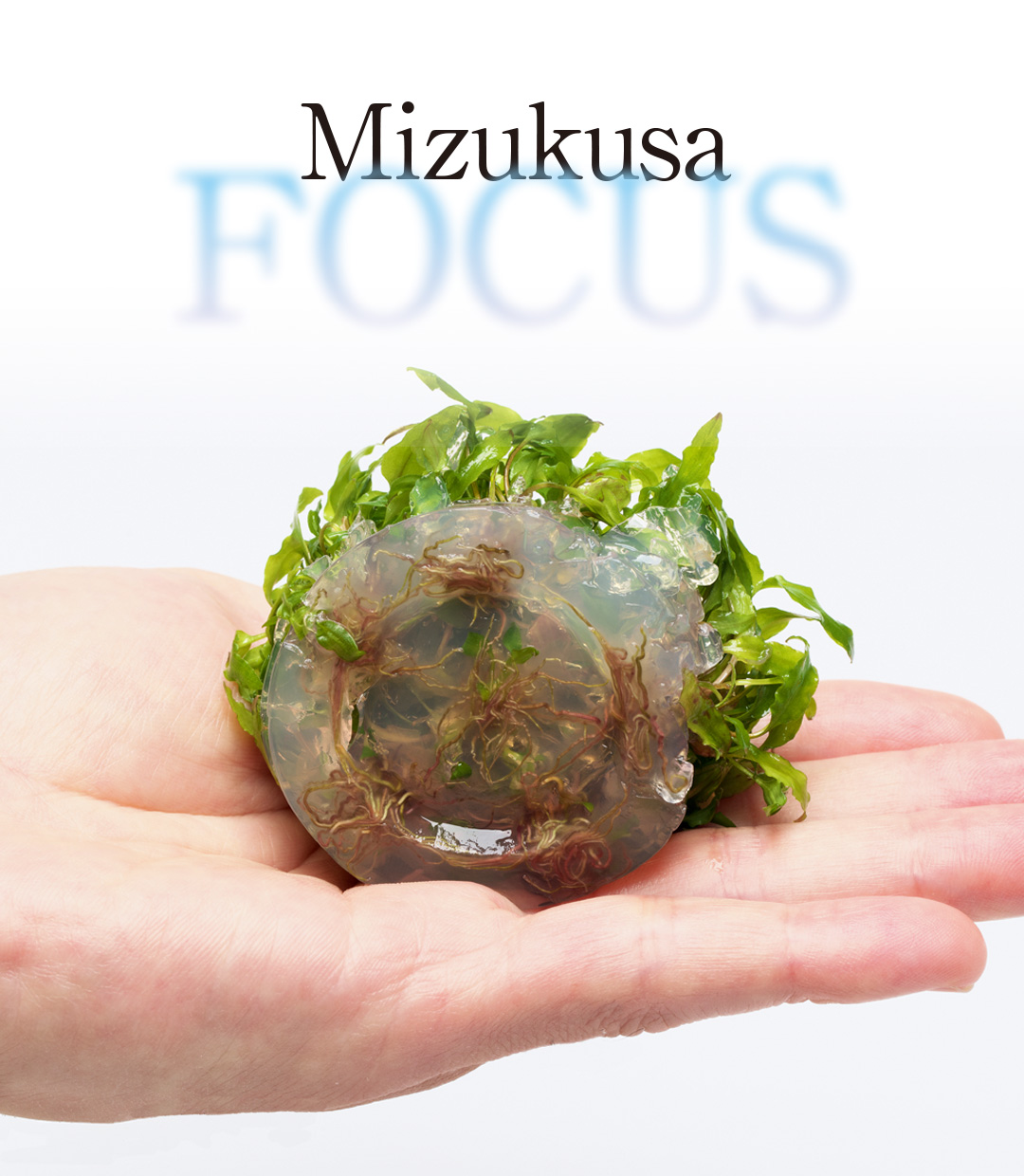 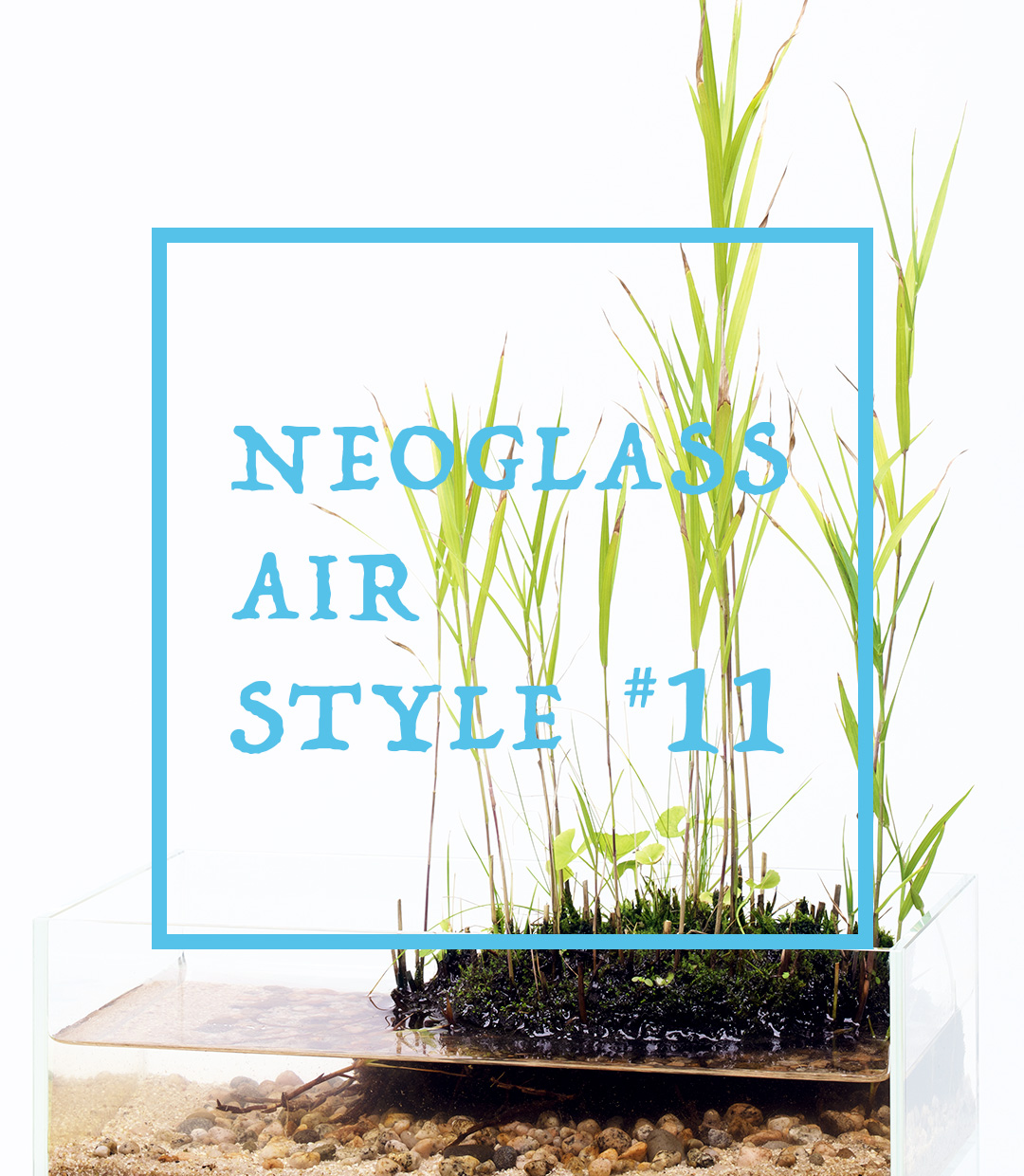 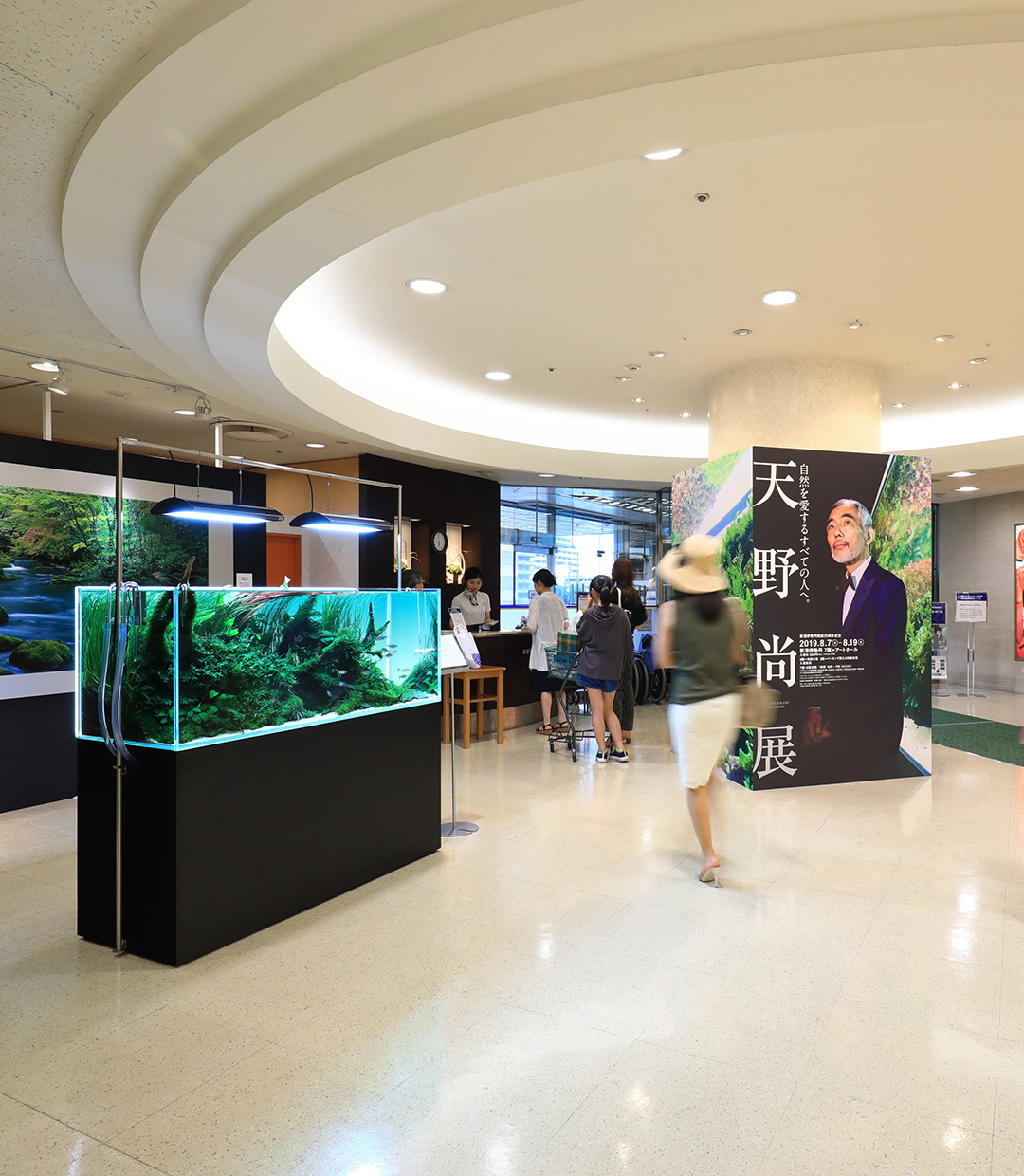 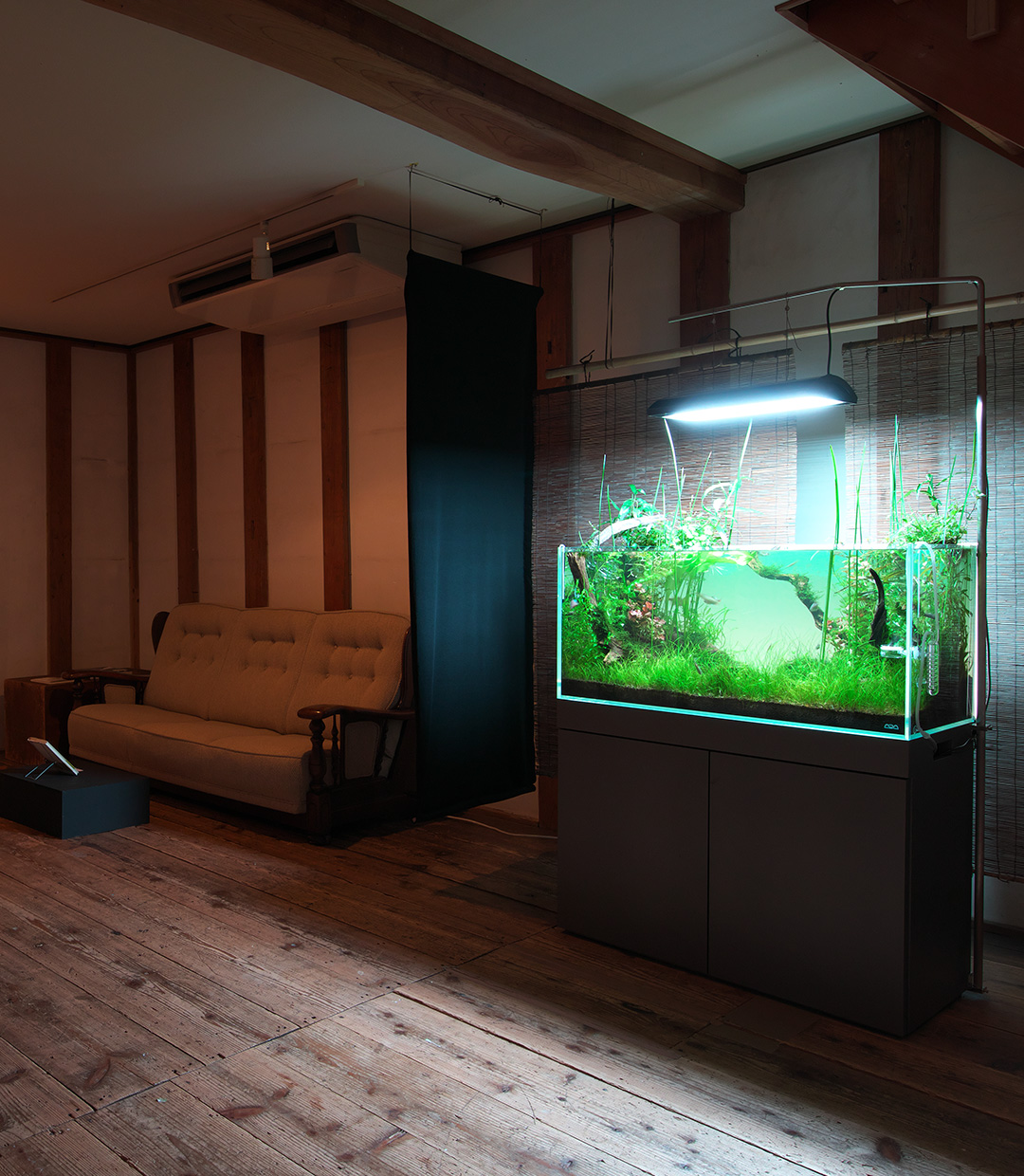 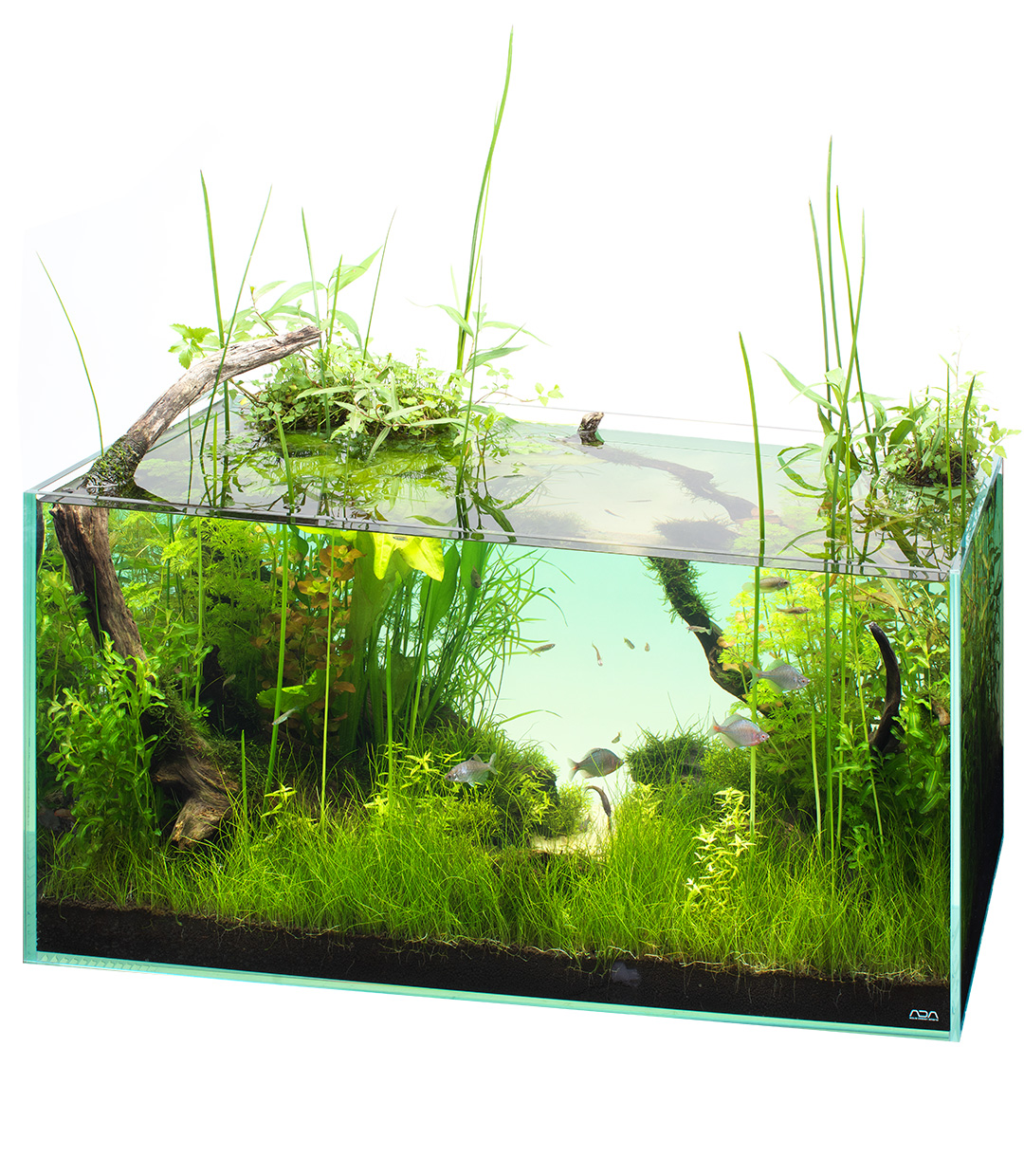 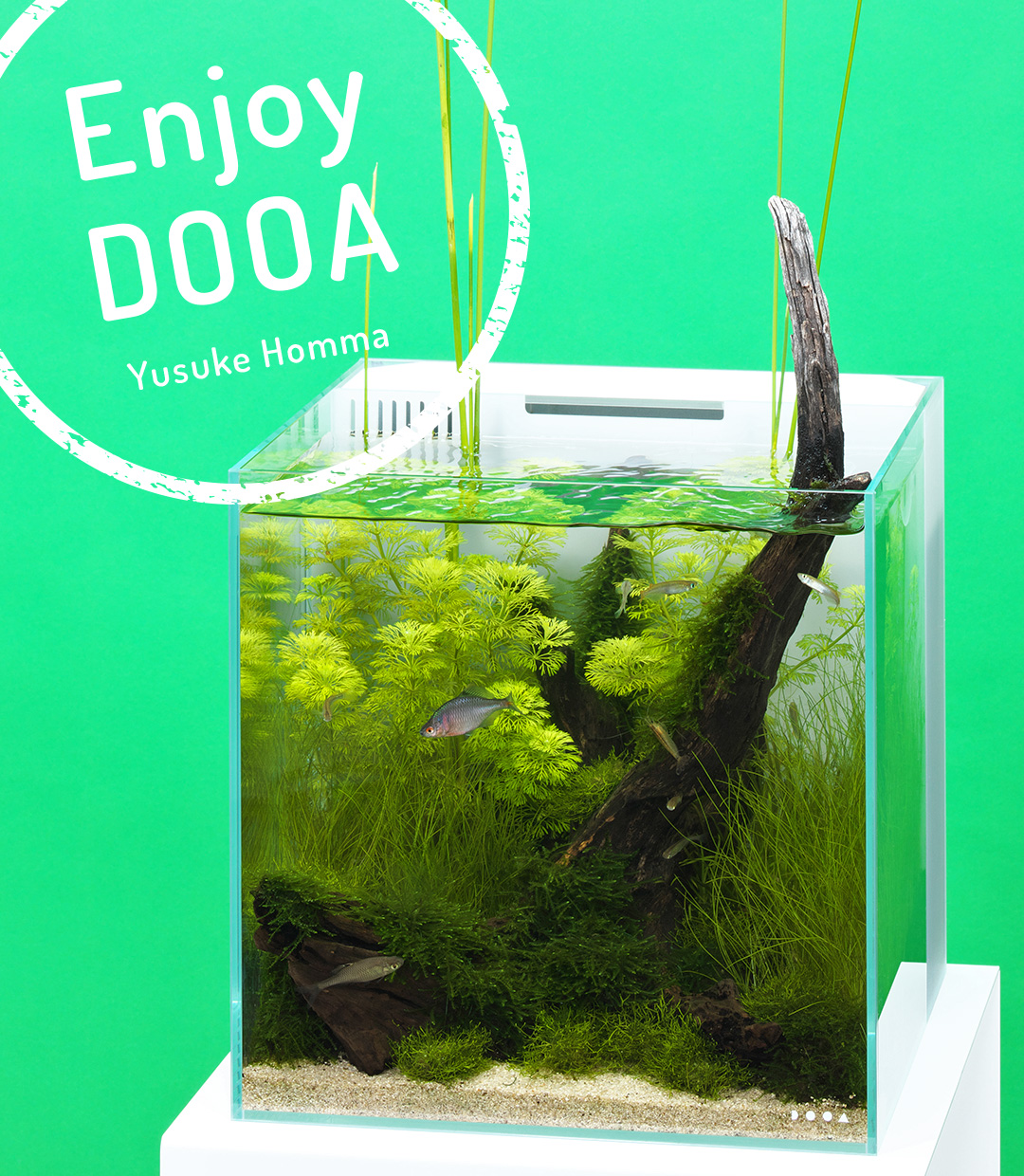 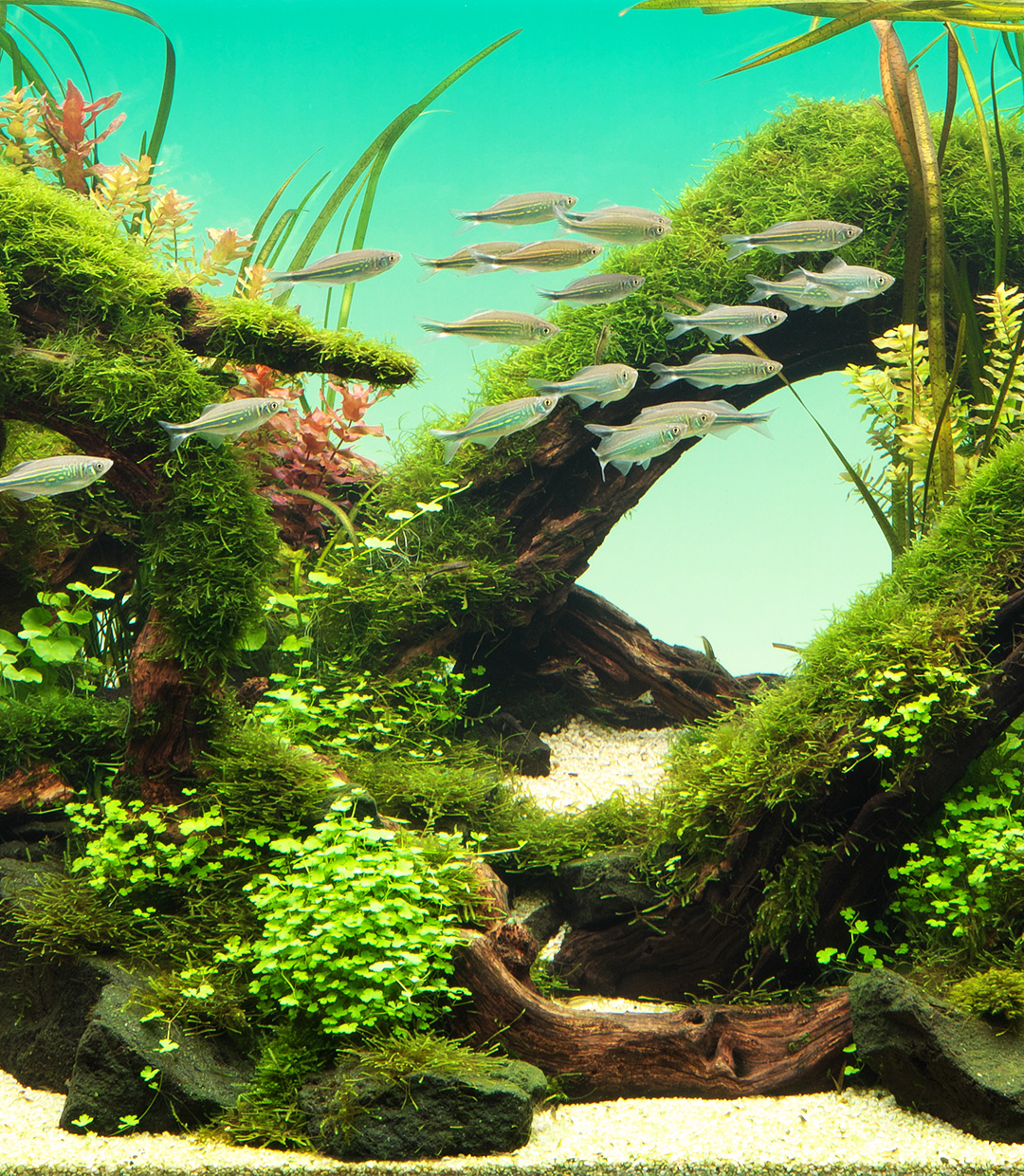 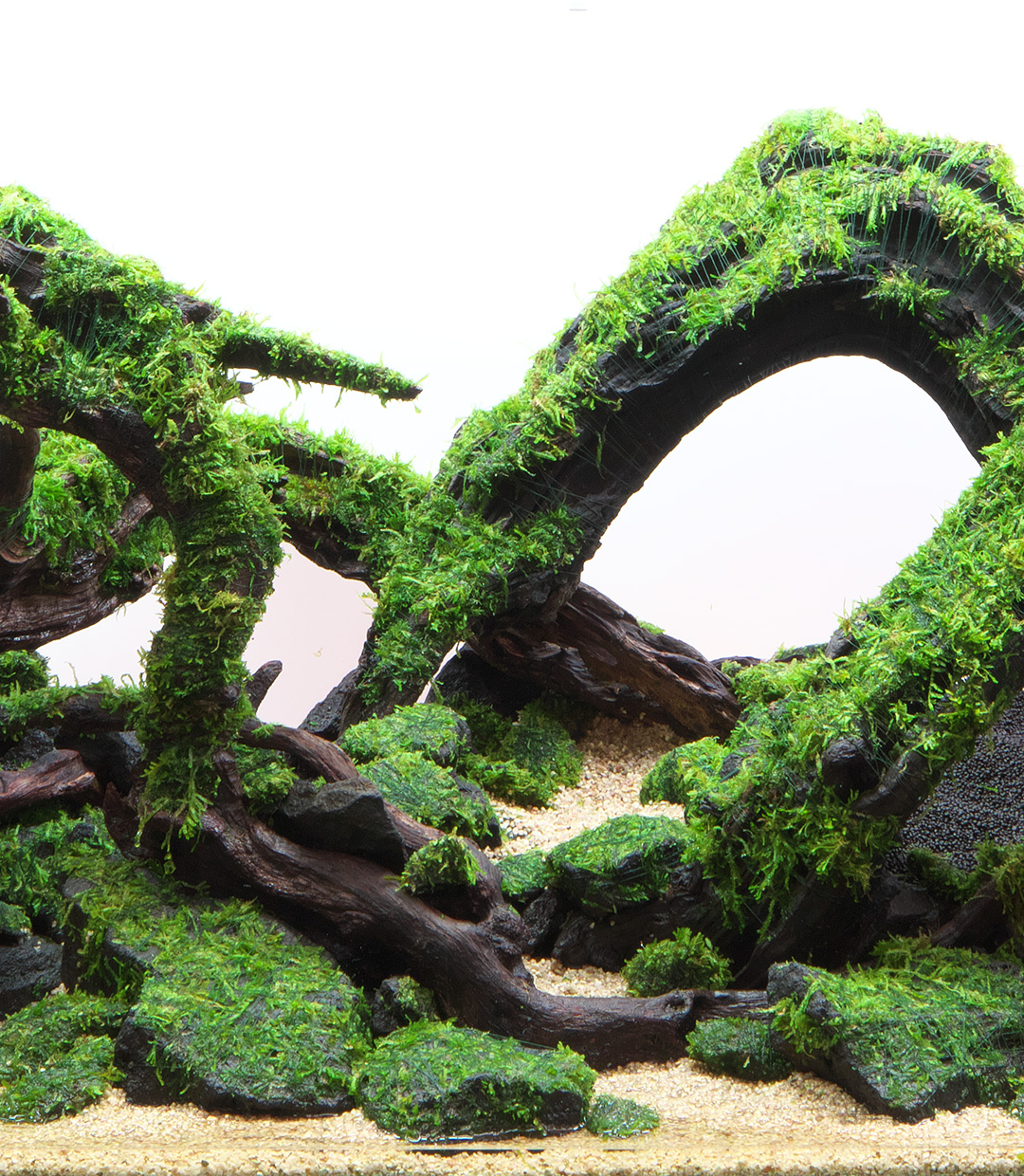