PRODUCTS
THE CHARMS OF ANUBIAS -Breath of Africa Fascinating Anubias-
2021.04.16 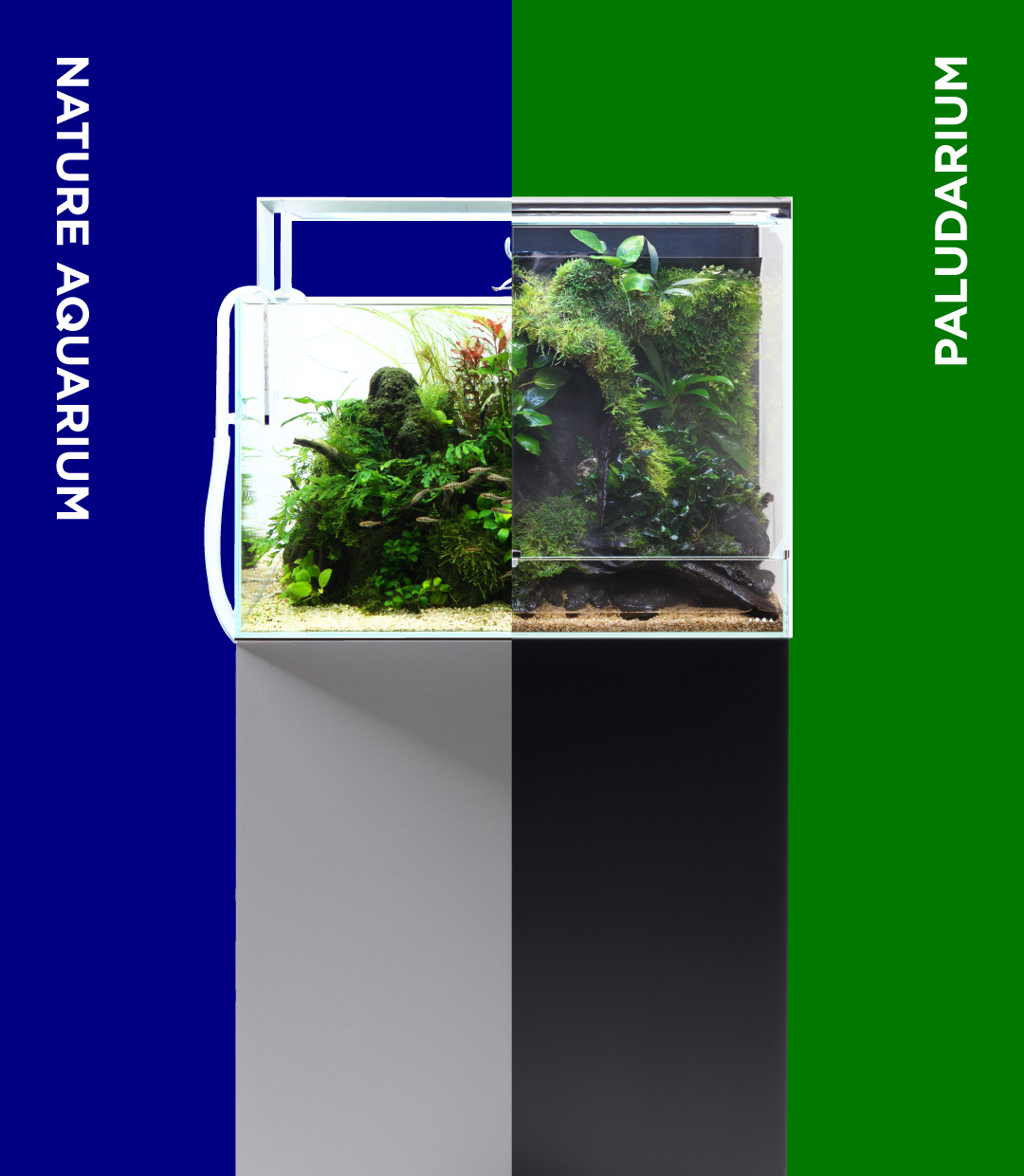 HOW TO
3 points for enjoying Anubias in Nature Aquarium and Paludarium
2021.04.16

The basics of Iwagumi aquascapes are to create a flow of water by arranging and tilting stones, and to recreate underwater scenery of nature. However, this aquascape added a subtle touch to an ordinary Iwagumi aquascape, and was created while imagining a landscape of a vast prairie. I only had minimum stones and kept them simple. And I chose calm looking Manten Stones to make them look like large rocks exposed in the prairie. The main point of this aquascape is that there is a valley between banks on the left and right. By having the valley go around the back of the bank on the right, a gentle hill leading to the prairie is effortlessly executed. I would be happy if you could feel pleasant wind blowing through the hills.
DATA
Shooting date: March 11th, 2020(ADA)
Creator: Yusuke Homma
Aquarium: Cube Garden W180×D60×H60(cm)
Lighting: Solar RGB x 3, turned on for 8.5 hours per day
Filter: Super Jet Filter ES-2400(Bio Rio L)
Material: Manten Stone
Substrate: Aqua Soil – Amazonia Ver.2, Power Sand Advance L, Bacter100,
Clear Super, Tourmaline BC
CO₂: Pollen Glass Beetle 50Ø, 10 bubbles per second via CO₂ Beetle Counter (using Tower)
Aeration: 15.5 hours after the light is turned off using Lily Pipe P-6
Additives: Brighty K, Green Brighty Mineral, Green Brighty Nitrogen
Water change: 1/2 once a week
Water quality: Temperature: 25ºC; pH: 6.8; TH: 20 mg/l

Fish
Paracheirodon simulans
Crossocheilus oblongus
Otocinclus sp.
Caridina multidentata
Prairie of Glossostigma
As Takashi Amano found through practices of Iwagumi layouts, there is no other aquatic plant suitable for expressing a vast grassland but Glossostigma.The pleasant Glossostigma prairie that is seemingly endless gives us a feeling of openness and peace.

In Iwagumi layouts, there is a style established by the founder of Nature Aquarium, Takashi Amano. Although it is based on Sanzon Iwagumi which is an Iwagumi technique for traditional Japanese gardens, giving arrangements such as boldly tilting stones and making steep embankment with a keen sensitivity based on nature observation, it was established as Amano’s own aquascape style. Even if the size of aquarium tanks, types of stones, species of aquatic plants and fish were different, the style was perfect because it was obvious at a glance that the Iwagumi layouts were created by Amano. However, it is true that Amano himself was struggling to go beyond the perfect style. While following in Amano’s footsteps, I always try to find new creative ways for Iwagumi layouts every chance I get. This aquascape I created for an event was a layout which I challenged myself to create in order to make people enjoy it from every angle with three dimensional ingenuity.
Inspirations from scenery
Onogame, a scenic spot that represents Sado Island. At the skirt of the massive monolith sticking out to the shore, a prairie is spread, and daylilies called Tobishima kanzo are in full bloom in early summer. I imagined how a pleasant wind is blowing through the prairie.

Intention of the composition
To express a massive monolith located far away, calm looking Manten Stones are chosen. In the circled area, I wanted to make people look into the aquarium tank by purposely placing a stone at the borderline between visible and invisible.

①A point for choosing aquatic plants
To create hills and a valley in the depth of 60cm, it is necessary to make an embankment with a steep slope. On the steep slope easy to slide, by using Wabi-Kusa Glossostigma, I was able to prevent Aqua Soil from sliding.

Products useful for maintenance
For trimming Glossostigma, a pair of straight type Pro Scissors Short is useful because they can trim in a wide range. For trimming in the front area of the aquarium tank where it is deeper, Pro Scissors Wave is suitable.

②Execution of depth with hills and a valley
Although it doesn’t apply only to Nature Aquarium, execution of depth is an important point to give depth to art work such as photography or painting. In this aquascape, by creating an invisible part (valley) behind a hill, it hints a long stretch of the hill and executed a depth.

NATURE IN THE GLASS ‘Windblown Hills’ 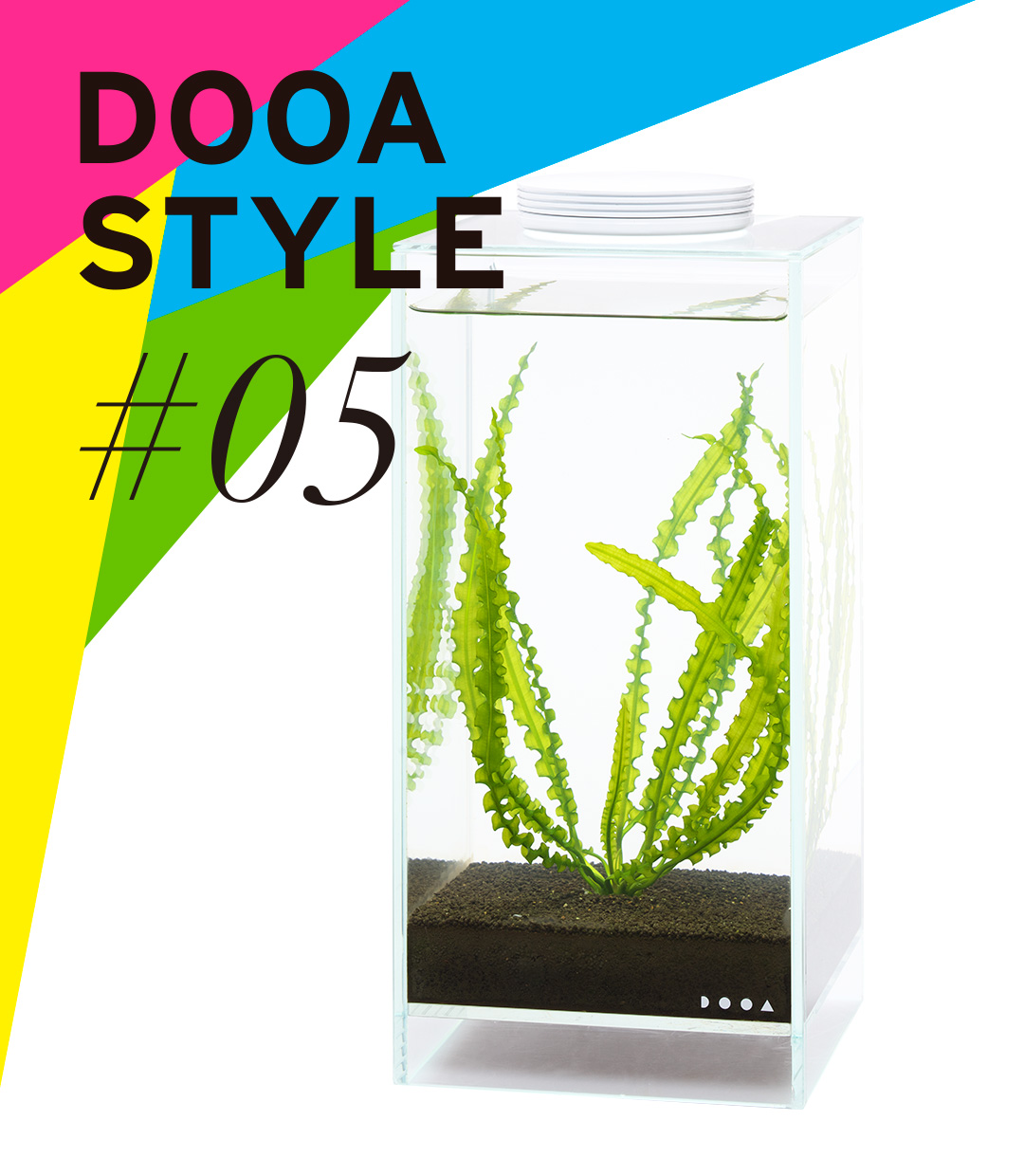 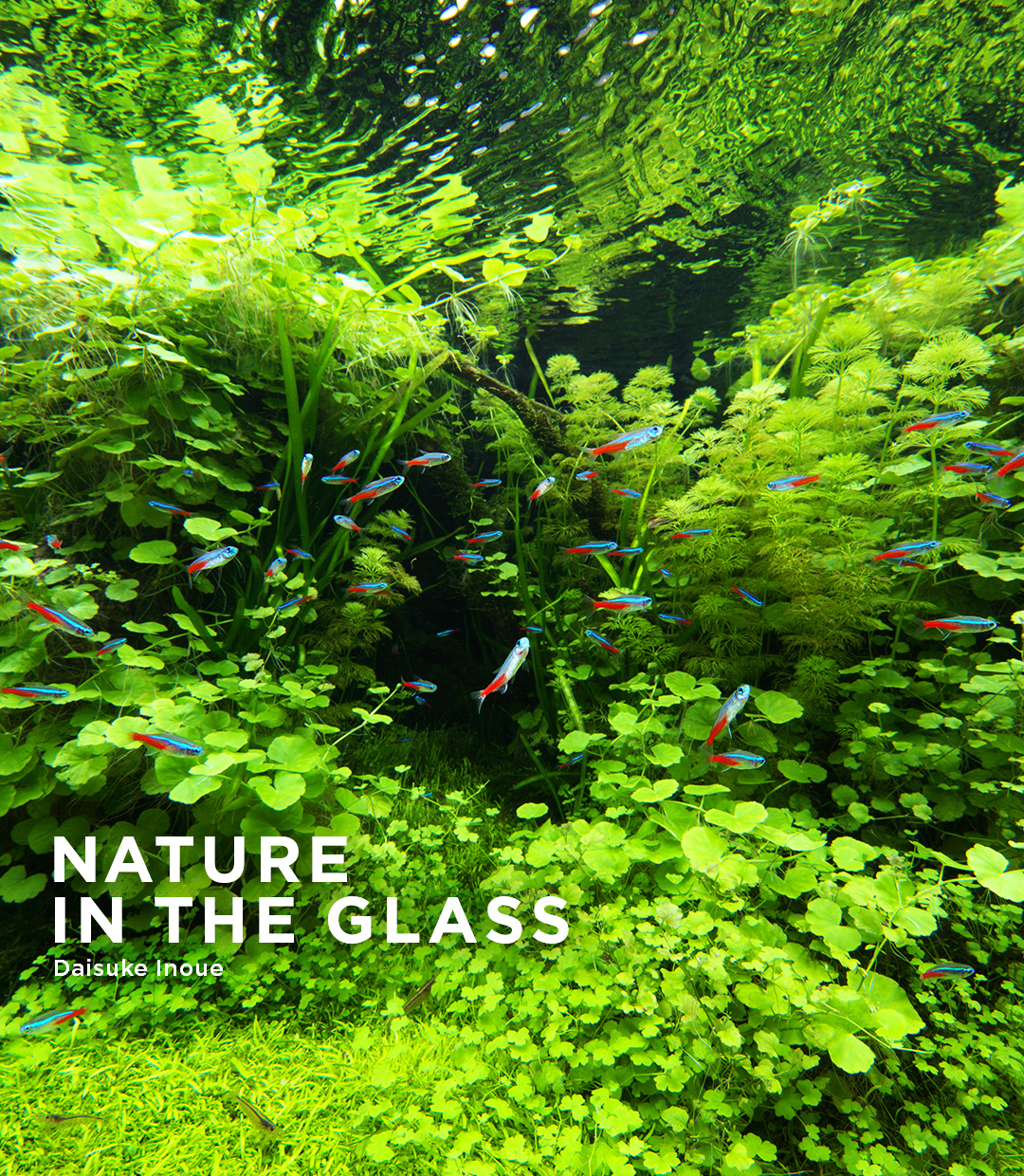 NATURE IN THE GLASS ‘Green Heaven’ 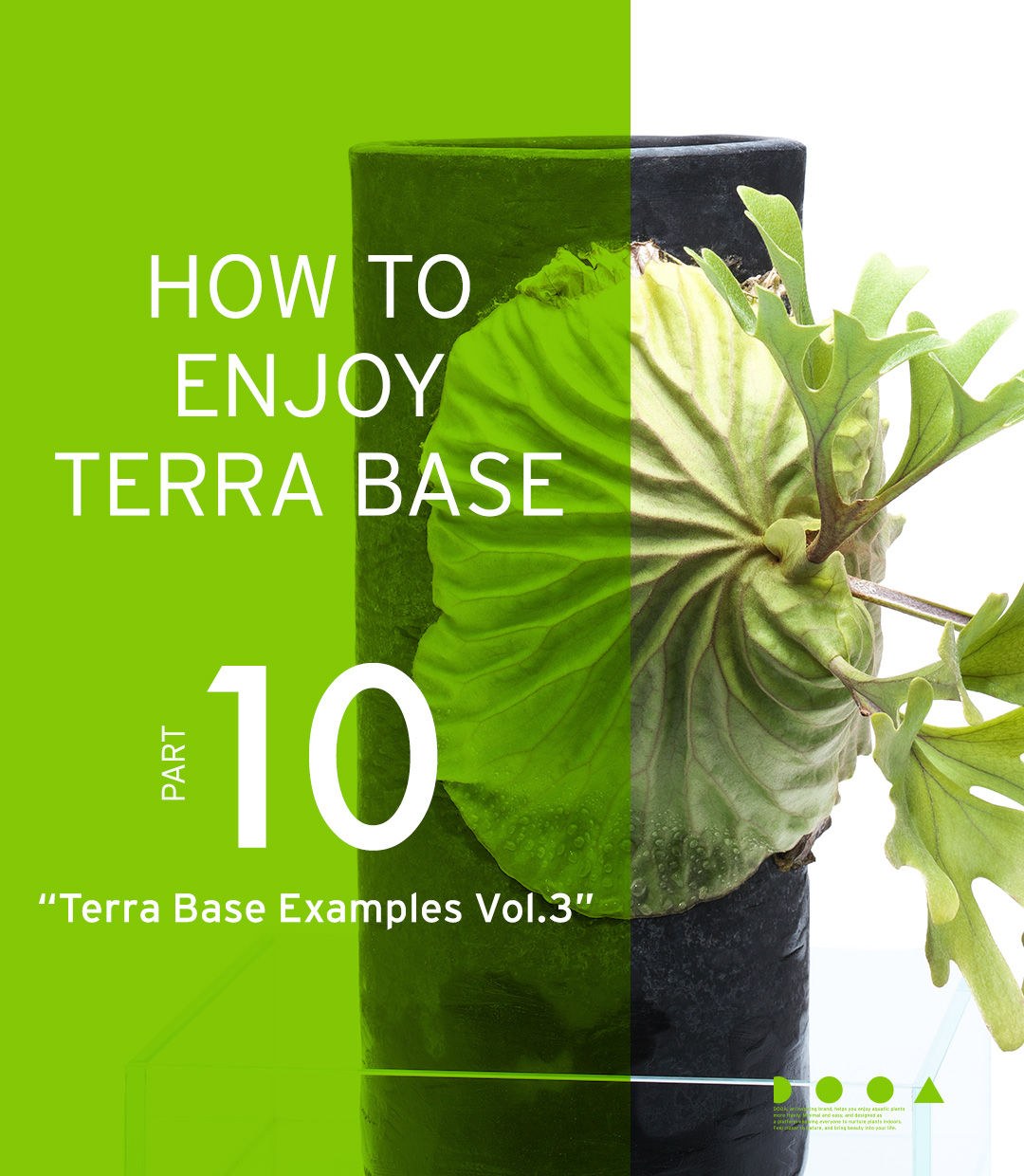 HOW TO ENJOY TERRA BASE “Terra Base Examples Vol.3” 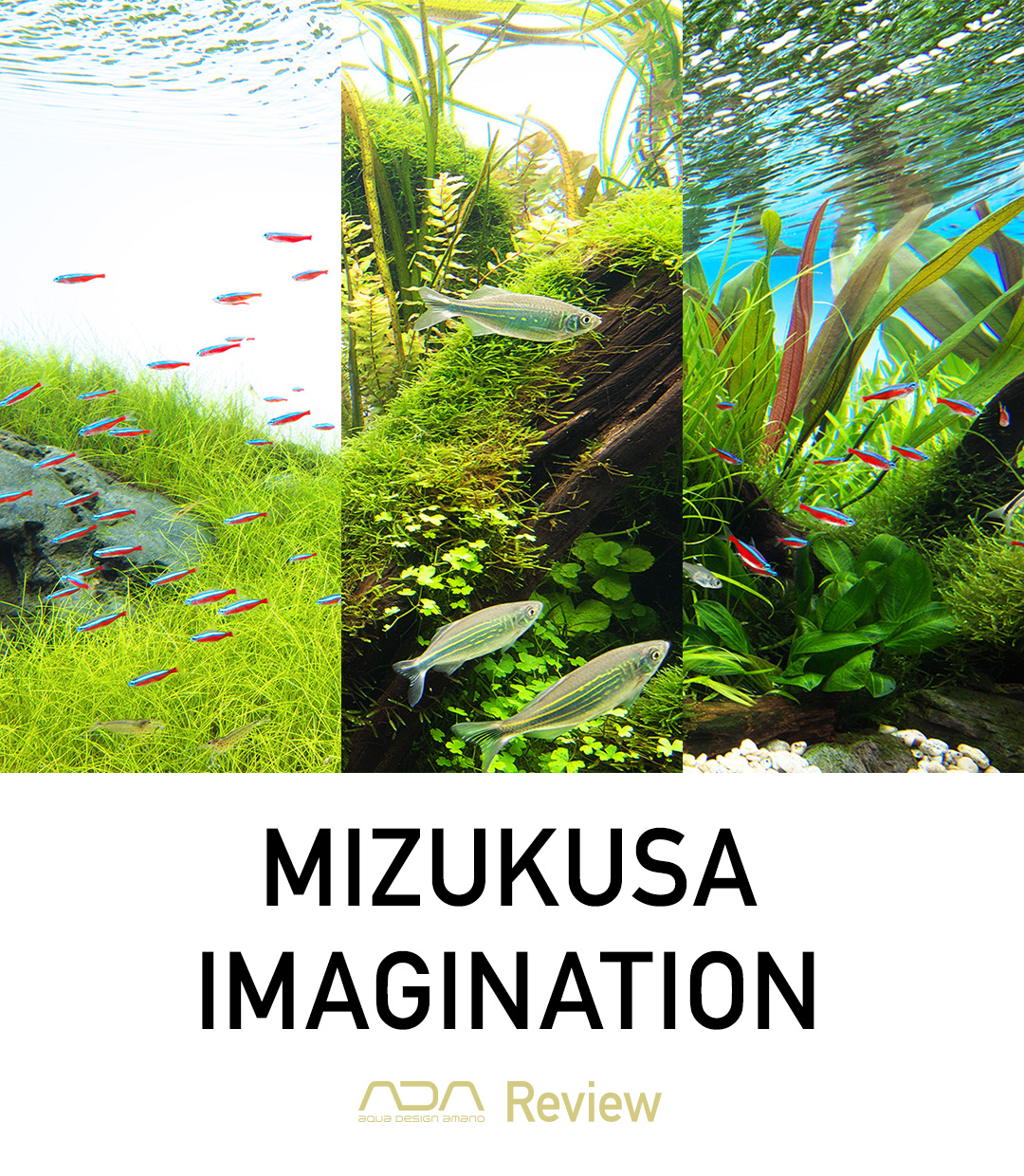