World Report : In U.S.A. by Karen Randall (A member of the board of the Aquatic Gardeners Association)

Wow, wow, wow. Another AGA Convention is over and done. And it was such a special one! I have been to every single AGA Convention… one of only a handful of people who have done that. And of all the conventions we’ve had, this was my favorite. The setting, the speakers, the workshops, the hotel, everything was great.

Late Friday afternoon, the convention kicked off in earnest with opening remarks from our president, Cheryl rogers, and introduction to Luca Galarraga’s aquascaping demonstration. I have known Luca for a number of years now, and have had the pleasure to judge with him, work on the AGA Contest Committee with him and watch him and his group become world powers in the largest international aquascaping contests. There are a number of excellent aquascape artists in the world, but Luca and his Aquabase Team are exceptional, not only in their talent, but in their willingness to work together and eagerness to pass their knowledge on to others. We are so lucky to have had the opportunity to learn from this kind, intelligent, and talented man, who, himself, has learned directly from Akashi Amano as well as other top ADA aquascape artists. Watching him work was like watching magic happen before our eyes. Yet, he was able to explain his every design choice, and carefully show us the techniques he uses as he works. The result was a very beautiful scape, finished in a tiny fraction of the time he usually has to work on a tank! 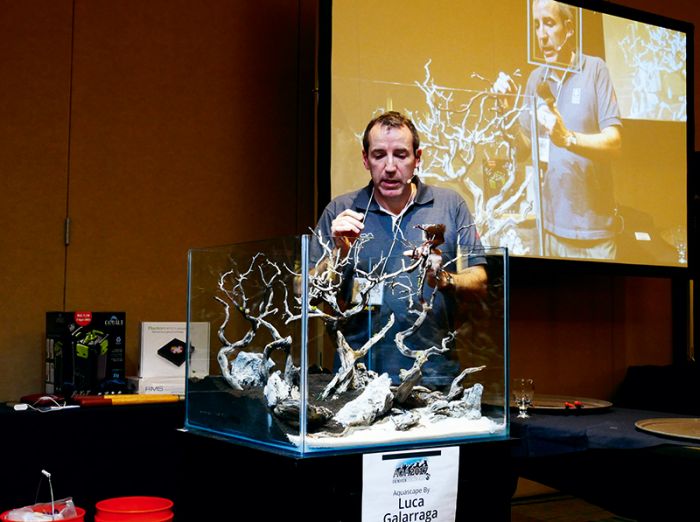 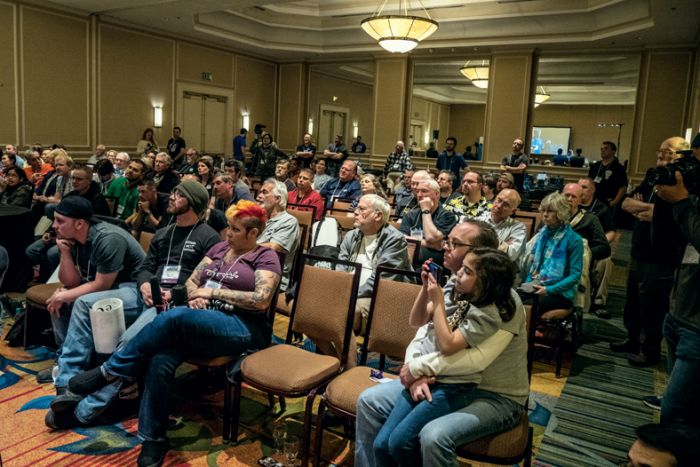 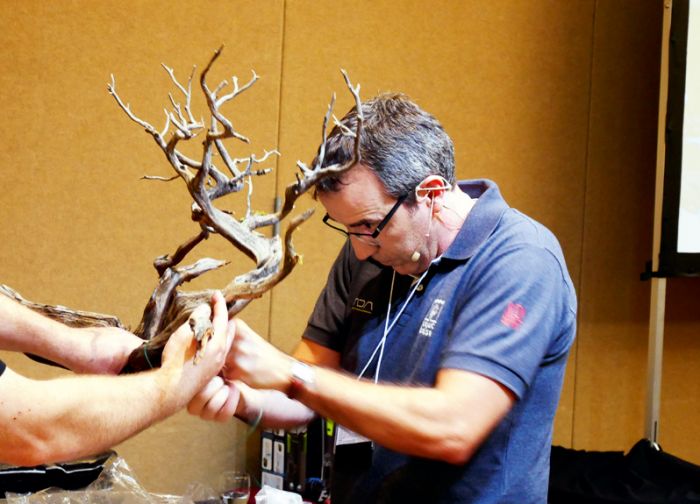 Next we segued into our aquascaping workshop, where participants had the opportunity to learn, hands-on, while being coached by one of our talented aquascape experts. With a ratio of only two participants to each mentor, there was plenty of time for one on one teaching. I would like to thank all of them for volunteering their time to help newer aquarists learn to create beautiful tanks. I would also like to thank the sponsors who make the workshop possible. Aqua Design Amano donated a lovely set of pinsetts to every participant.

When moved to their final position along the back of the conference hall and filled, the tanks looked amazing. The whole hall glowed in their brilliant light, and Luca’s tank was like the patriarch of the family!

Aquariums created by participants of the aquascaping workshop 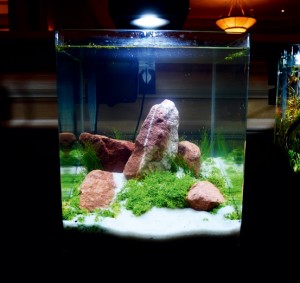 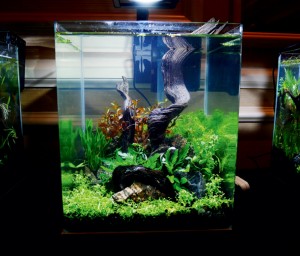 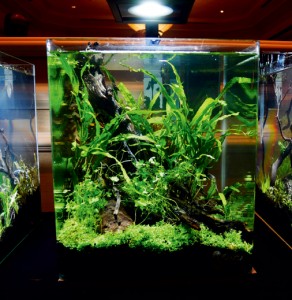 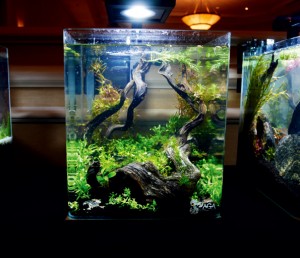 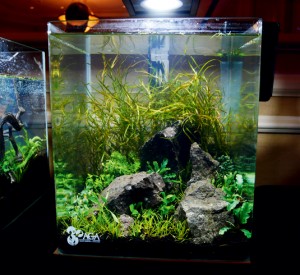 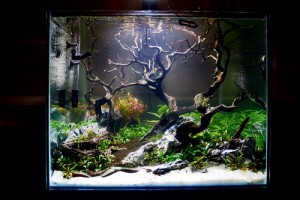 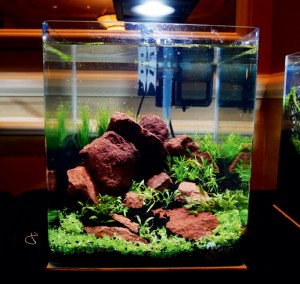 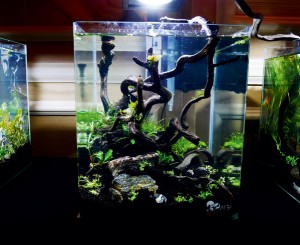 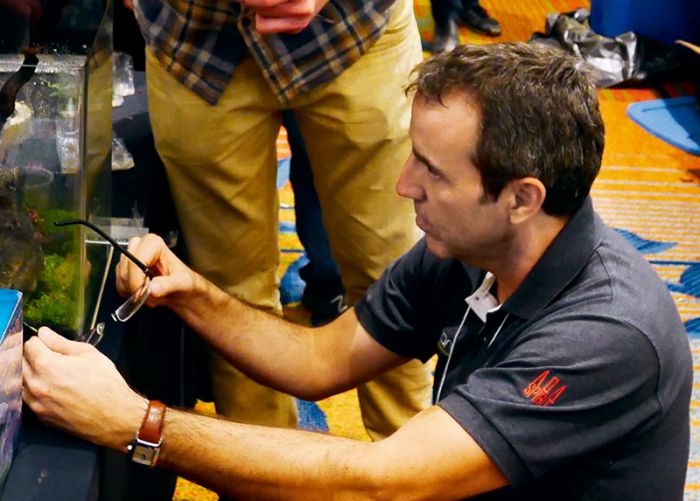 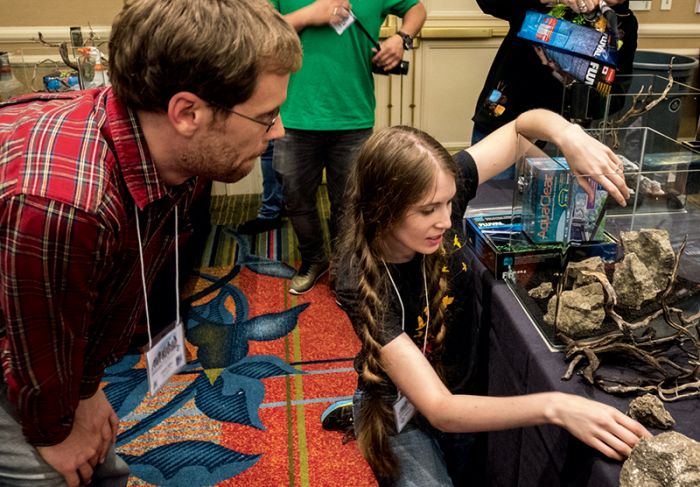 Bright and early Saturday, we were ready for our line up of outstanding speakers. Right after lunch, we split into two groups one headed for the Wabi Kusa workshop, a first for AGA and ably lead. What fun we had playing with mud! The other half of the group headed back into the lecture hall to hear a number of 10 minute “Lightning Talks”

Next on the afternoon docket was my talk, “Sunken Gardens”, which is sort of the “Cliff Notes” version of my new book. Hopefully beginners went home with a good idea where to start with planted aquariums. And then Luca was back on, this time with his extremely interesting talk on the process of preparing a high-level aquascape for the big international contests, and a little of his own background in this amazing art form.

Sunday we dived right into our huge aquatic plant auction. We moved a huge number of items mostly plants, but also gorgeous Manzanita left over from our workshops and demos, plus items from manufacturers. The highlight of the day for me was the auctioning of Luca’s beautiful tank. The highest price ever paid for a single lot in one of our auctions!

Finally, it was a wrap for another year. People broke into smaller groups for dinner, and more fellowship in the bar. By mid-day on Monday, most people were home or on their way, but with wonderful memories to sustain us until the next convention.

Text and Photo by Karen Randall