*Green Tunnel ~ My father, Takashi Amano, and I ~* #27 The Multicolored Island

Sometimes, I remember the 72 count colored pencils. If somebody asks me what is the most unforgettable present I have ever received, my answer would be the 72 count colored pencils. It was the Christmas present I received from Santa Clause when I was eight years old. As I opened the box shaped pencil case, there was a world of color in front of me. Composing color gradation, each pencil with individual color name lined beautifully in an elegant manner. The colors I had never seen and heard until then. For the girl, who had known to draw pictures with only 12 colors, it seemed as if a lot of doors were opened. “Mom! Look! I’ve got an amazing present from Santa Clause!” I went to show the present to my mother who was preparing our breakfast in the kitchen. She, who actually was the Santa Clause, smiled at me (of course, I came to know the fact much later). The set of colored pencils became my treasure and I had kept using until I moved from my hometown to go to University. It was so special thing for 8-year old me that I sometimes remember it even now.

I assume everybody has one or two memories from childhood like this. My father has such kind of memories a lot more of than I do. The place where dwells a romance. For him, it was a map of the world, for example. On a map he discovered countries that he had not known the name, mountains that form the landscape, rivers are getting connected one after another. The more he looked at a map, the more inspiring it got, he stretched his imaginations by traveling freely in his mind. Looking at a map, he was particularly attracted to the Yaeyama islands, floating in a sea of marine blue, that are located in the westernmost point of Japan. He was drawn to these floating fragile tiny islands that cannot be visible unless carefully looked. He thought of the land thousands of kilometers away; how the landscape looks like, what kinds of people are living there?

When my father was 21 years old, he finally went on a journey to Yaeyama islands where he had dreamed about since he was a child. In about a month and half, he had visited seven islands out of eight, and the last destination was Aragusuku Island. My father was interested in “the shrine dedicated to the Mermaid” on the island and it was the reason why he decided to visit the island at the end of his trip. What the young man on the small fishing boat sailing swiftly saw was dramatically changing color of nature. Navy blue in the deep sea turned into pale blue with sparkling sea surface. The dark green forest he had seen in the distance turned into light green that was shining under the light. There was a white sand beach between the blue and the green. The vivid purple of full-bloomed Iriomoteazami (Cirsium brevicaule) was lending the touch of color in the landscape. Being dazzled by the landscape of southern sea paradise, he arrived the island with full of expectation.

No matter how much he walked, however, what he could see was abandoned houses, and soon he had realized that there was hardly anybody living on the island. He finally met an elderly woman and asked her about guesthouse. He was told that there were only two houses on the island and, needles to say, there were no guesthouse. He made a petition to the woman to let him stay at her place because he had ten days before the boat would come and pick him up. Naturally, the woman showed wariness over the strange person but she agreed reluctantly to accept him after seeing the young man being desperate. Thus, my father stayed at the elderly woman and her husband’s house. Being asked the purpose to visit the island, he didn’t say anything other than, “I came here to take pictures.” This was because he noticed the elderly lady’s facial expression changed and she obviously became grumpy when he mentioned, “the shrine dedicated to the Mermaid.” Back in those days, 90% of the island was unexplored and covered by native forest. Also, he was afraid that if he explored around the island, local residents would keep their eye on him. Therefore, even my father couldn’t manage to expand his range. Although he was getting bored, going fishing in the small boat with the elderly couple and their neighbor became his daily routine, and it was more fun than anything else. While they were catching giant clams, my father was grabbing fishes and octopuses by hand and enthralled by butterflyfish and angelfish. It was a life of self-sufficiency. When they couldn’t go fishing on a rainy day, my father talked about Niigata and Tokyo, and described comically about the struggles in snowy region, and they enjoyed listening to him.

One day, the elderly woman was going to the shrine dedicated to the Mermaid to weed and asked my father to join. The small shrine nestled quietly in the dense native forest. She told my father a little bit about the sad history of the island and Dugong (the creature believed to be legendary Mermaid). The ninth day, my father’s last evening at Aragusuku Island. While looking over the sky and sea turning fiery red at the sunset, my father asked the elderly man about the Mermaid. Although it was not easy to understand because of the elderly man’s dialect, he told my father, “two years ago, I saw the footprints of two Dugong behind the beach, ” with pointing at the white sand beach shining golden against the setting sun. According to him, it was the last sign of the living Dugong he had seen. My father looked at the profile of the elderly man illuminated at sunset, and his deeply carved wrinkles. It was showing a proof that he had been surviving in the nature; the history he had experienced. Being felt tears welling up, my father ran down to the beach. The next day, the old man put the boat to the sea for my father and he left the island with being seen off by three people, the island’s entire population at that time. “You must come back again,” they said with tears in their eyes. My father held their hands and told them “One day I surely come back”.

The travel essay titled “The Island Where Mermaid Sleeps” is published in the little booklet Suizokutan, which is a prototype of Aqua Journal. When ADA was still the small shop named Tropical Aquarium, it was given to customers as ADA newsletter. While creating planted aquarium, breeding fishes and developing new products, my father found time to write essays. The boy, who had used to spread a world map and got excited, turned 35-year old, and wrote essays thinking the places spread inside of him. The place where dwells a romance – the gradation of color is always woven there. 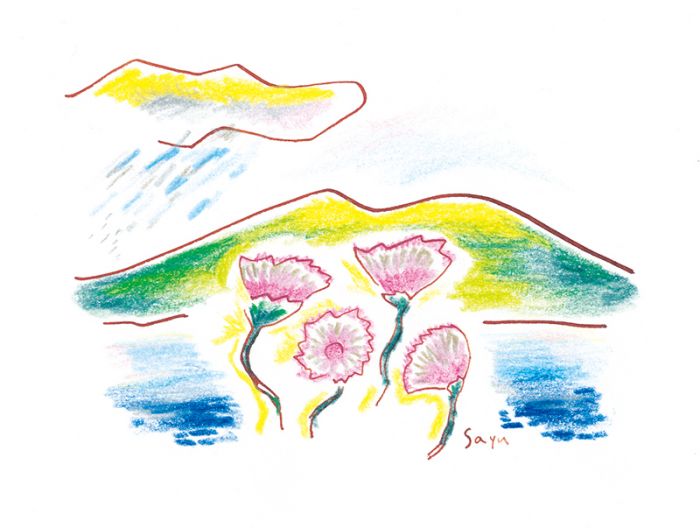