A revamped model of AQUASKY, which is the world’s first LED lighting system designed for planted aquarium, has been recently launched under the name AQUASKY G. The Nature Aquarium Notes of this issue looks into the changes made and explore the features of the new lighting system AQUASKY G.

The history of ADA has been in tandem with the advancement of lighting system for planted aquarium. Lighting system, together with CO2 system, is crucial for Nature Aquarium to make aquatic plants perform photosynthesis. Although Nature Aquarium lighting initially used commercially available 3-wavelength fluorescent tubes, ADA has always been the pioneer in planted aquarium lighting since the development of NA Lamp, a straight-tube fluorescent lamp designed for growing aquatic plants, and a compatible lighting system Green Glow/604. In the course of transition from straight-tube fluorescent lamp, twin fluorescent lamp, metal halide lamp to LED lighting, the performance ADA pursues has never been changed despite the changes in type of lamp or bulb used. Then, what are the performance required for planted aquarium lighting? They are: 1) providing the light intensity sufficient for plant photosynthesis; 2) emitting the light that enables healthy growth of beautiful plants; and 3) emitting the light that makes aquatic plant color look clear and vivid. The founder of Nature Aquarium Takashi Amano focused particularly on the third requirement which was often considered unimportant in growing aquatic plants. This enthusiasm of Takashi Amano was also passed on to the latest LED lighting systems for planted aquarium, SOLAR RGB and AQUASKY G.

AQUASKY G is a revamped model of AQUASKY. Now, let’s look back and review the conventional type of AQUASKY. AQUASKY was developed amidst a trend of LED becoming a mainstream lighting backed by the popularization of white LED and environmental consciousness. In this growing trend, many LED lighting designed for ornamental fish aquariums appeared in the market. Early models of these LED lights had a positive impression that they were bright energy-saving light; however most of them actually did not have sufficient light intensity not only for growing aquatic plants, but even for appreciation of ornamental fish. This fact even created a misconception that aquatic plants do not grow with LED light and in such a circumstance, LED lighting was not often used for planted aquarium. Knowing this situation is questionable, ADA has successfully developed LED lighting that emits sufficiently bright light and proved that aquatic plants can grow with LED light. This is how the world’s first planted aquarium LED lighting AQUASKY was born. Subsequently, ADA’s lighting system has further evolved into AQUASKY MOON emitting brighter light and SOLAR RGB, a pendant-type LED light that is designed for larger aquariums and brings out the colors of aquatic plants. Today, LED lighting has become dominant in planted aquariums.

■ Changes between AQUASKY and AQUASKY G

Among the abovementioned three performance requirements, the conventional type of AQUASKY adequately satisfied the first requirement regarding light intensity. As for the second requirement (emitting the light that enables healthy growth of beautiful plants) and third requirement (emitting the light that makes aquatic plant color look clear and vivid), however, there was still a room for improvement. SOLAR RGB was designed to incorporate these improvements and it is so far the most ideal lighting system for Nature Aquarium. Nevertheless, SOLAR RGB is hard to downsize due to structural constraints and consequently, it is not suitable for small aquariums in terms of cost and installation method. To overcome these challenges, AQUASKY G was developed as AQUASKY’s revamped model suitable for small aquarium. The easy-installment feature, which is one of the signature features of AQUASKY, is maintained and provided to AQUASKY G. The shapes of lighting unit and stand also remain the same (the lighting unit of AQUASKY G is separately available). The major changes made to AQUASKY G are mainly related to light; comprising 1) adoption of new LED element that makes the plants’ green color look more vivid; and 2) use of a diffuser, just like SOLAR RGB. With these changes, the green color of aquatic plants now looks more vivid and attractive with AQUASKY G. The changes also led to the optimal light intensity and light distribution, resulting in healthier and more beautiful plants. Enjoy fascinating Nature Aquarium with AQUASKY G! As for appearance of AQUASKY G, the colors of adapter, switch and cord has been changed. Besides, a diffuser was provided to the lighting unit to prevent LED elements from being directly visible.

What features does the light of AQUASKY G have?

Comparison of green color under conventional white LED (top) and AQUASKY G (bottom), together with the spectrum of these two types of light. Green color looks more vivid with AQUASKY G.

AQUASKY G’s light intensity immediately below the lamp seems to be lower than that of the conventional AQUASKY. Why?

The conventional AQUASKY uses white LED. To ensure the light intensity sufficient for sun plants, its light intensity immediately below the lamp is set to considerably high and this design enabled most of aquatic plants to grow under white LED light. However, some plants show slow growth due to photoinhibition and some suffer the symptom of green leaves turning into reddish color. AQUASKY G achieves light condition suitable for more aquatic plants with its diffuser that enhances light distribution. AQUASKY G’s light intensity immediately below the lamp is undoubtedly lower than AQUASKY, but it is an outcome for the pursuit of optimal light for growing aquatic plants. 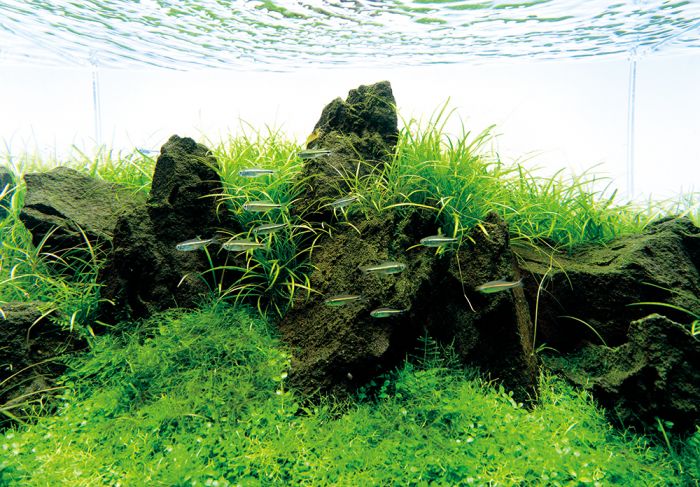