*Green Tunnel ~ My father, Takashi Amano, and I ~* #29 The Memories with Katsuji

My father and Katsuji got along for some reason. Katsuji, my paternal great-grandfather, had especially a strong personality among the unique Amanos and he amazed even his own family with his abandon. However, it seems like he had something common with my father, one of his grandsons. And my father, as a child, was influenced by Katsuji more than a little. He created stories for Katsuji who loved historical novel (the purpose was to get pocket money, though), or sometimes he told the childish stories freely and enjoyed the reaction from perverse Katsuji.

Katsuji loved to drink more than anybody around my father. Every time Katsuji went to the bathroom, he stopped by the kitchen, grabbed the bottle of Sake, Japanese rice wine, to pour in a glass and gulped. He couldn’t no longer imagine a life without Sake. Chiyo, my father’s mother, lost her patience with Katusji and came up with a secret plan. Originally it was as simple as dilute Sake with water. However, what she held in her hand unconsciously was a bottle of vinegar. It was with affection toward her father in law but not being crafty – it was not her intention at all. Accidentally Chiyo diluted vinegar with water, and put the bottle in the fixed place where Katsuji usually put his Sake bottle. Without knowing anything, Kastuji went to the kitchen after the bathroom as usual, picked up the bottle, poured the liquid into the glass, and took a big gulp of “Sake”. Giving a questioning look, he muttered, “Oh, tastes strange.” At that time, he was already getting senile and he kept drinking the strange taste Sake for a while.

In his late teens, my father lived away from his home in Niigata to attend the bicycle race school. One day he received a phone call from Chiyo to the dormitory and was told that she was coming to the open day with Katsuji. It was a boarding school and students had to strictly live a regular life – studying before noon and training in afternoon. Getting up at 6 am every day, students had to immediately get ready to gather at the training field, shirtless even in winter. After the call from the instructor, the voice of shaven head young men echoed, “one, two three, four, five!” After that, they ran out of the school gate and dashed up 150 steps stairs. Even though it was an everyday exercise, that morning ritual was incredibly tough. At the top of the stairs, there is the statue of the Goddess of Kannon that is dedicated to the cyclist who passed away during race. Bicycle race is a battle for life. It was as if they were questioned whether they were ready for it or not at the moment when they passed the statue.

Even though those young students were committed to such strict and tough environment, they were in the midst of adolescence after all. Four students shared a 6 Tatami mats room together and there were hardly any freedom in the life of dormitory. Their only pleasure was taking busses and trains to the nearest town, Mishima, to have fun on Sundays. They ate whatever they like, secretly smoking cigarette. They brought back things and food from the town to the dormitory and hid them in the upper closet not to be seized by instructors. The instructors were, however, far more strict than students had imagined. Those instructors on night duty suddenly entered room to check students’ belongings while sleeping. They took off slippers to avoid footstep and quietly came over in barefoot. There was actually an attempt of counterattack by the students who had a buildup of resentment, but it resulted in a small one after all the struggle. In my father’s case, he was found out and scolded by instructors for his action because he was insensible. He, for example, ate instant noodles in his room and the instructor could immediately detect the smell. His personality didn’t allow him to be sneaky.

Even such school hosted the open day for parents a few times a year. Because my father’s parents hardly attended the open day, after he heard that Chiyo comes to the school with Katsuji, he was glad, but, at the same time, a little nervous. Taking trains from Niigata, Katsuji and Chiyo came all the way. Although Chiyo knew that it was not allowed to bring foods, sure enough she brought a bag of my father’s favorite foods. “Takashi’s favorite pickled burdock with miso” was a must. Without knowing what to do, my father quietly received the bag and hided it in the upper closet with wondering, “Why I have to be so nervous for just burdock pickles?”

Although it was called the open day for parents, there was not a special program. Basically students showed the usual daily training to parents, but sometimes there was a presentation of club activities. At the bicycle race school, students had to join a club (my father belonged to the Photography club). On the day Chiyo and Katuji visited the school, the brass band club was supposed to perform. Everybody gathered in the hall, and by the time three of them entered the hall, people were ready to see the performance. Then, the voice of Katsuji, who walked slowly behind my father and Chiyo, echoed, “Hey Chiyo! Brass band? What is it all about?” That’s one thing that both Chiyo and my father felt extremely embarrassing. “Be quiet!” Chiyo said. Everybody giggled. Even my father was overwhelmed by Katsuji who does comedy anywhere at his own pace.

Anyways, the open day that Katsuji and Chiyo came to visit is an amusing story that is enshrined in the Hall of Fame. That day must have been the unforgettable day for Katsuji, too. I, his great-grandchild, laugh again imagining three of them. 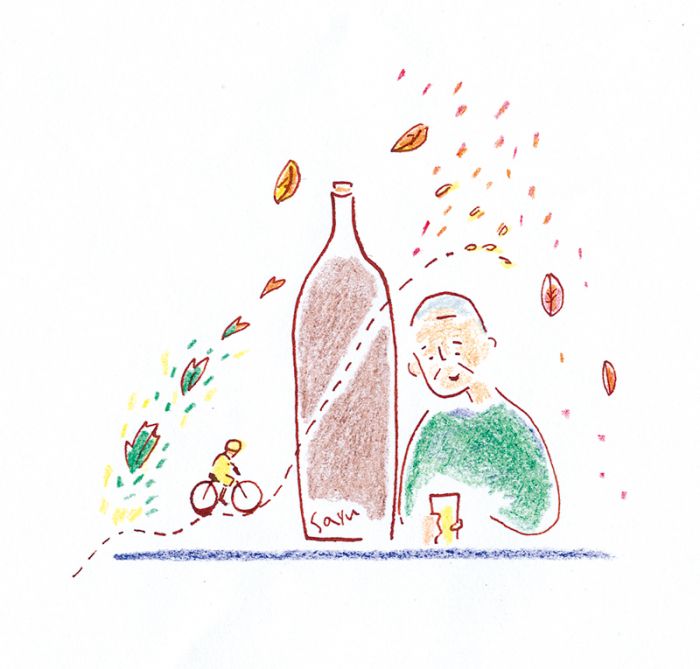